Steve of the River 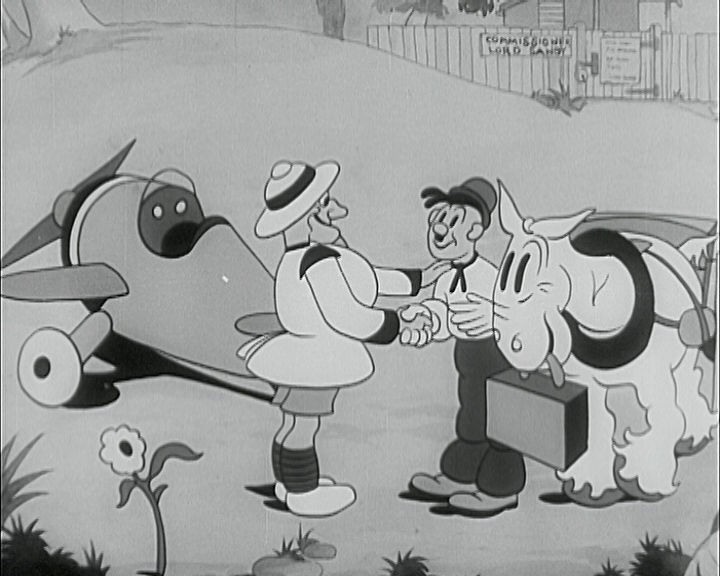 Animation following the adventures of Steve and the trouble he finds himself in.

This cartoon film starts with Commissioner Lord Sandy bidding goodbye to Steve and Sam and setting off in his aeroplane. This is spotted by the native lookout. Through telemessage and then messenger boy, the word reaches the 'Kink'. He sends out a drum message: "Lord Sandy has gone - let's make - whoopee!!" Natives come running from all directions. A sign reads, "Cannibal stew-pot. Not to be used again. By Order. Lord Sandy. " his is taken by the natives to the King, who growls something about "Whiteman stew". The natives are rounded up. A sub-automatic machine gun fires arrows at Steve and Sam who are captured and taken back to the native village. Sam is prepared for the stew-pot. The natives play cruel tricks on Steve and he is ridden by the 'Kink' who is cruel. Steve dumps the 'Kink' in the river and escapes. He is stopped by a native but plays dead. Meanwhile, Sam is still in the stew-pot. Steve chops down a tree that falls in logs, one of which splits to form a ready made jungle drum. Steve beats out a new message: "Lord Sandy is back! Lord Sandy is coming - Scram!!" The natives flee. Sam is still frying until rescued by Steve. The two reach the end of Jungleland. The 'border' is guarded by a native. They slip past disguised as a zebra and a tortoise. The native follows and a chase ensues to a variation of Flight Of The Bumble Bee. Steve sheds his hoops that capture the native and then force him inside a tree. Steve and Sam are safe at last.

This film is described in British Animated Films 1895 - 1985 by Denis Gifford as broad burlesque of the Alexander Korda film, Sanders Of The River, from the Edgar Wallace stories. It was described by Pathescope Monthly, October 1937 as, A horsey version of the late Edgar Wallace's Sanders of the River, but there is far more comedy than drama in this account. This is one of six films made featuring Steve The Horse entitled Come On Steve, No. 4.

Steve of the River