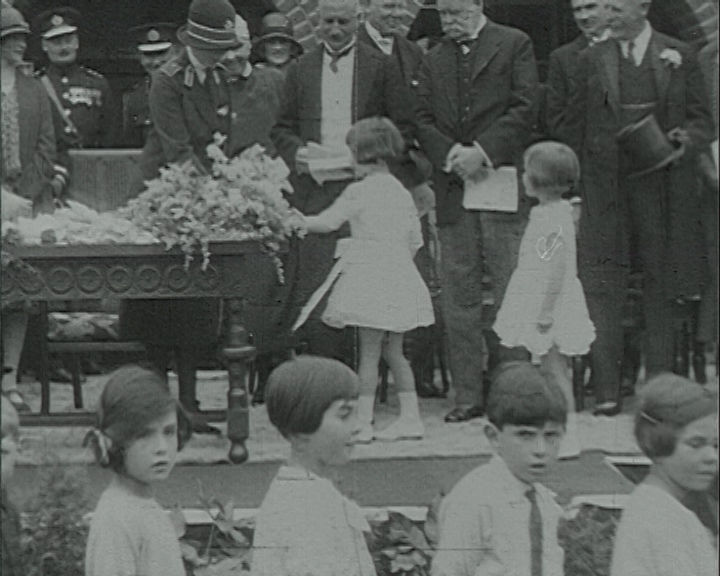 Newsreel coverage of HRH The Prince Of Wales' visit to Norwich, 30th May, 1928 to open Eaton Park.

The visit to Norwich of HRH The Prince of Wales on 30th May, 1928. The Prince arrives by car and inspects soldiers. Following interior and exterior shots of the Prince visiting the Power Station, the Prince goes by car to the Guildhall. There are shots of the crowds waiting on Guildhall Hill. The Prince's motorcade arrives and the Prince alights to place a wreath on the war memorial at the front of the Guildhall. There are shots of the crowd cheering as he leaves and then dispersing. The Prince visits houses erected for servicemen. He speaks to one of the occupants and is seen leaving one of the houses. At Mousehold Aerodrome, the Prince inspects some of the aeroplanes on display and meets some of the pilots. The Prince appears to visit a nursing home. There is a guard of honour formed by nurses. He enters the home and later meets the men who are lined up. At Eaton Park, the Prince gives a speech from the bandstand to formally open the park. He then walks around the park viewing some of the facilities. The last sequence shows the Prince in flying gear, back at Mousehold aerodrome getting into his own aeroplane to fly home.

Gala Day At Norwich - is also a busy day for Prince of Wales who fulfils numerous engagements and is cheered all the way.- and then HRH flew home.

As well as the events recorded in this film, the Prince laid the foundation stone at the new Masonic Temple. There is a section from the middle of this film that has decomposed beyond the point where it is possible to see the picture. This is cut out of the copy but it may have recorded this event. In Ipswich, Suffolk, 1930, Visit of the Prince Of Wales. The Prince can be seen piloting his own Westland Wapiti. Here he leaves in a Bristol Fighter, a left over from World War I. He had flown to Norwich from Yorkshire in the aeroplane. This was the first official flight by a member of the Royal Family. During the late 1990s cuts in council spending led to a deterioration of Eaton Park and of many other Norwich Parks. On May 15th, 1997 it was announced that Norwich City Council had been awarded £4.1m of money from the National Lottery to part fund a four year programme of improvements to four of Norwich's parks; Eaton Park, Waterloo Park, Heigham Park and Wensum Park. Doug Underwood, Chair of the Leisure Committee estimated that without this programme the Pavilion at Eaton Park would have had to have been pulled down within three years. Of the money awarded, and other funds provided by the Council, £2,685,000 was to be spent on restoring the pavilion in Eaton Park as a children's play area. The yacht pavilion and model boating pond were to be restored and floodlighting, signs, seats and benches added. Gaumont was founded as Gaumont Graphic in October 1910. It was issued bi-weekly, on Thursdays and Saturdays.