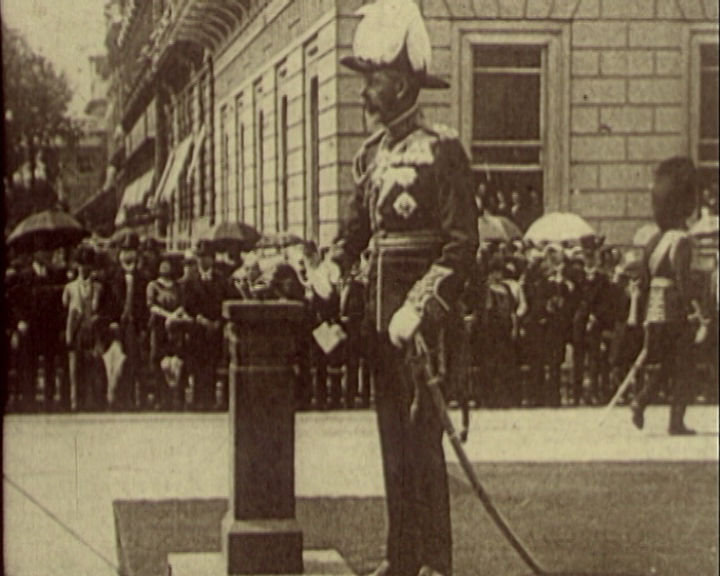 A celebration of the reign of King George V.

The reign of His Majesty King George V is celebrated in this newsreel-style tribute, collated on the occasion of his Silver Jubilee, celebrating twenty-five years since his accession to the throne following the death of his father, King Edward VII in May 1910. Opening with highlights of the King's life, from his birth at Marlborough House to his Coronation on 21 June 1911, it follows his travels to India, for the Delhi Durbar coronation celebration in 1911, and Germany, where he attends the wedding of his cousin Kaiser Wilhelm II's daughter. Following the outbreak of war, the King visits France, where his son the Prince of Wales is stationed. There he meets with French leaders and visits the great fleet and the Somme. Life after the war is filled with Royal engagements at home, where the King unveils a monument to his father, King Edward VII, opens the British Empire Exhibition at Wembley, attends Royal Air Force pageants and sporting events (football, horseracing at Ascot, tennis at Wimbledon and Ashes test cricket), relaxes on his racing yacht 'Britannia', receives King Faisal of Iraq, and oversees Trooping the Colour and Highland Games ceremonies. The film concludes with celebrations on Jubilee Day, 6 May 1935, where British Movietone filmed the parade and arrival at St Paul's Cathedral for the thanksgiving ceremony, followed by a procession back to Buckingham Palace, where the Royal Family wave to the adoring crowds from the balcony.