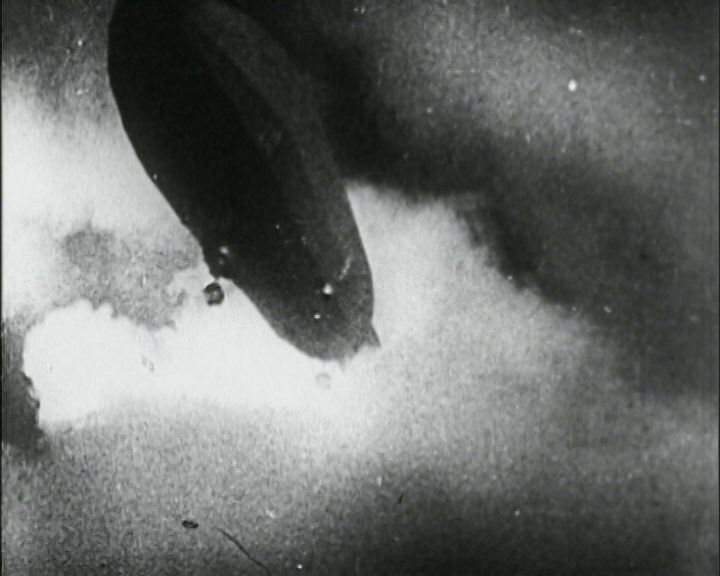 The film begins with a description of the first Zeppelin raid on Britain that took place over East Anglia on the night of 19th January, 1915. It was witnessed by a young boy in Hingham, who saw the navigational lights of the Zeppelin. These were the L3 and L4. The L3, captained by Captain Leutnant Johann Fritz, turned towards Yarmouth. Here it dropped nine high explosive bombs. These landed in the St. Peter's Plain area and claimed two casualties, Martha Taylor and Samuel Smith. C.R. Temple, an eye witness, describes the air raid as he remembers it. He emphasises that there was no comparison with the 1,000lb bombs of World War II. The L4 continued along the coast towards Kings Lynn. Samuel Utting and other eye witnesses describe this raid. Mary Goat, Percy's mother is quoted. Reg Goat, cousin to Percy, and Olive Smith, Maud Gazeley's sister, recall their memories of the occasion. Olive Smith remembers that people had heard of the raid on Yarmouth, but it had been ignored so that all the lights of the town were still switched on. The pump house at Kings Lynn docks was demolished. Jack Leader recalls this. Stills of newspapers, including the Daily Mirror, the Star, the Lynn News and County Press and the Daily Sketch, show the effect these events had on national psychology. The effects of war were brought home to the British people. The propaganda value was exploited by both sides. Recruitment was improved. The programme quotes the Hague Convention to show that the Zeppelin attacks, against two undefended towns, were illegal under international law. A map of the Eastern Counties shows Zeppelin raids over East Anglia, often on their way to London. There were 208 raids, dropping 6,000 bombs. 500 people were killed and 1100 injured. Zeppelins could fly very high and it was difficult to find methods of defence. Pilots Lief Robinson, Tempest and Sowery are offered as examples of the brave men who joined the Royal Flying Corps. The film shows a model of the naval air station at Yarmouth and a map shows the secondary bases at Narborough, Sedgeford, Holt, Bacton, Burgh Castle, Covehithe and Aldeburgh. Tony Overell, an author, offers an example of pilot's bravery. there is a quotation from W.B. Yeats and Air Marshall Sir Robert Saundby recalls a raid as a young pilot. The film tells of the crash of the airship LZ33 between Peldon and Wigborough in Essex, after attack from Fighter Pilot Brandon. The commander Captain Leutnant Bercker, brought the airship down into a field and then tried to warn the inhabitants of a nearby cottage that he was going to set fire to the ship. He received no replay, but did just that. The crew made off on foot. They encountered Special constable Edgar Nichols, who arrested them. James Rout, who lived in another cottage nearby, recalls the Zeppelin crashing. He shows a piece of the Zeppelin to the camera and recalls that a baby girl was born that night and named Zeppelina! On November 28th 1916, the L21 was shot down over nine miles off Lowestoft by Ft. Lt. Cadbury, Sub. Lt. Thames and Sub. Lt. Pulling. Cadbury, accompanied by Bob Leckey, shot down the L78 on August 5th, 1918. The crew included Peter Strasser, head of Zeppelin command.

Martha Gazeley had been widowed shortly before she was killed. Her husband had been killed on the Western Front.All the victims of 19th January 1915 were victims of bad luck. The airships had been heading for the Humber. They discharged their bombs over Norfolk owing to bad weather