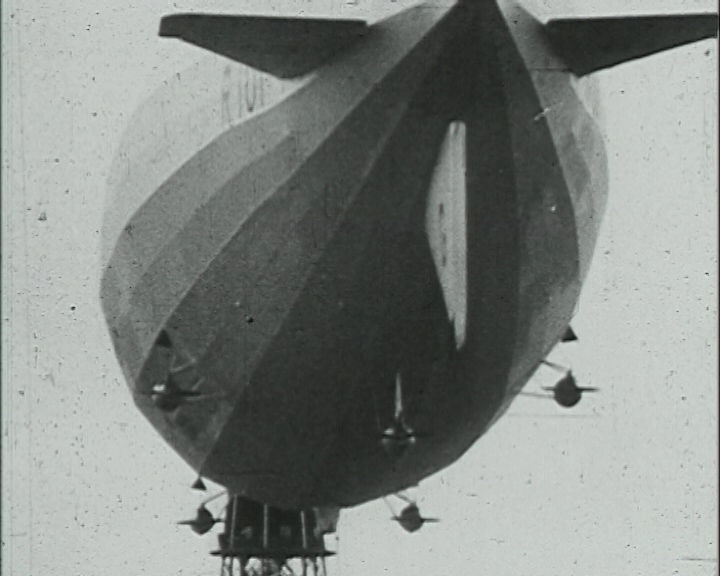 Newsfilm coverage (British Movietone and Pathe Super Sound Gazette) of the R1O1 disaster and the funeral of the victims.

The first part of the film shows close-up and distant pictures of the R101 in dock. There are shots showing men at work in the stores and loading provisions. (British Movietone). The next part shows similar pictures. There are scenes showing the captain and the crew in uniform, in front of the R101 and entering the lift. There are some onlookers in civilian dress, including the Director of Aviation. There are some shots of maintenance men at work on the R101, giving an indication as to its size. The soundtrack at this point reveals the sound of the airship.There are some panoramic scenes taken from the R101 in flight over Britain and France. Then the burnt out, tangled mass of iron as the wreckage is inspected by a French official. The final scenes are of the funeral of the victims in Beauvais. We can hear the sound of the bands playing and there is a wounded man, presumably a survivor, watching the funeral with officials. (Pathe Super Gazette). The film ends with a silent prayer and a lingering shot of the British Ensign. (Unidentified.)

The last flight of the R101

'Pall of tragedy overhangs our nation again. Last pictures of the R101 taken a few hours before the start of her fatal flight. (British Movietone.) Cardington - Tragedy most profound - pathetic interest attaches to these exclusive pictures taken of the ill fated R101 just before she left on what was to be her last journey.... then disaster ... overwhelming in its stark horror ... Beauvais: France pays superb, National, local ,civil and military - tribute of sympathy to victims of aviation's most awful tragedy. (Pathe Super Gazette.) Their work is done, They have come home to sleep, No rain, no tempest can harm them now.Theirs the peace and immortality of death, Ours the heartache and the pride.' (Unidentified.)

The R101 was, with the R100, the last rigid airship to be built in Britain. This R101 flight was to have been the first airship flight to India. The R100 had more success, flying the Atlantic to Canada, but the fate of the R101 finished the development of airships. The R100 was sold for £470 and broken up for scrap. There were 54 people on board [the R101 when it crashed]; 6 survived. Men lost included:- Flight Lieutenant R.S. Booth, Captain of the airship Sir Sefton Brackner, the Director of Civil Aviation Flight Lieutenant H.C. Irwin Squadron Leader E.L. Johnston, the navigator Flight Lieutenant Michael Rope, a leading airship design technician Major G.H. Scott, the Assistant Director of Airship Development Brigadier-General Lord Thompson, Minister for Air The steel frame for the R101 was made by the Norwich engineering firm Boulton and Paul at their Riverside works in Norwich. Much has been written about how the R101 was despatched on her maiden flight to India without ever having flown in bad weather and without even having carried out speed trials. The ship had been beset by problems: diesel engines selected for the R101 had proved to be almost twice the calculated weight; servo controls to operate the control surfaces were either not fitted or were removed at considerable expense; a new midship section and an additional gas bag had to be added to give the craft added lift; and in the view of reliable experts the ship should not have set out on the Empire flight when she did. (G. Kinsey, Pulham Pigs. Terence Dalton, 1988.) Weakness That Cost The R101.... (name withheld) wrongly states that the R101's structure failed .. where an additional section had been inserted. In fact, she was seen to be structurally intact after her forced landing. Subsequent partial collapse of her framework resulted from the hydrogen fire. The R100 and the R101 were planned in 1924 as experimental prototypes towards linking Britain with India, which aeroplanes could only do with several intermediate stops on non-British soil. As petrol was deemed dangerous in the tropics, diesel engines were specified, but owing to their great weight, Vickers received an interim dispensation to use petrol, provided R100 did not attempt India, and so long as the R101 retained diesels, despite their crippling weight penalty. The Achilles heels of both ships were their outer covers - R100's spanned vast unsupported areas, which leaked badly, whilst R101's were weakened by being tautened AFTER doping. I later found out by microscope why this was. When R100 met a squall in Canada, her fins ripped so that her captain (in an unpublished letter) said she was lucky to get through. R101's fabric was replaced - except near the nose, where it had been doped in place. However, we now know that it was later relaxed, and re-tautened, so unsurprisingly, it ripped when she met atrocious weather. Her deputy designer inspected the rip (which caused an immediate nose-dive) and advised control to slow engines (to just breast the headwind and reduced further damage) and to apply full up-elevator to bring her to near horizontal for a forced landing. She bounced, but caught fire on the rebound. The government abandoned airships since aeroplanes could now do the job; this embittered Nevil Shute (Barnes Wallis's deputy and successor) into making unwarranted allegations for which he later apologised. Sir Peter Masefield and the undersigned have now researched the whole issue over several years, and unearthed many new facts. I hope soon to publish the new evidence for the attempted emergency landing, which ended so disastrously, and we now know that R100 would have fared no better under similar conditions. (Letter from Norman B. Peake, Airship Heritage Trust Council, Cardington Bedfordshire. Published in the Eastern Daily Press, 15th January, 1998.) (See also: Pulham St. Mary, Norfolk, 1925, R33's Great Flight.) British Movietone News was the first sound newsreel. It broadcast from June 1929