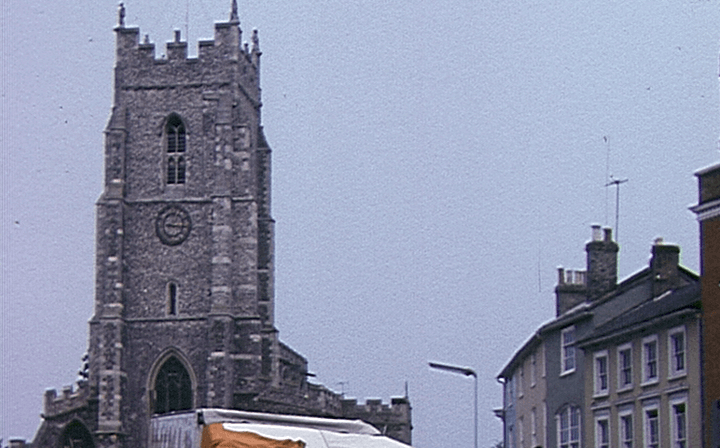 Billy Elliot, Wild Rose, Pride, The Souvenir, and The King’s Speech are some of the most critically acclaimed and well-known UK films – all of which have been backed by National Lottery funding.

In the East- Essex, Hertfordshire, Bedfordshire, Norfolk, Suffolk and Cambridgeshire – alone, the National Lottery has invested £34.9million into over 700 film-related projects over the past 25 years including films such as 45 Years, Pin Cushion, The Duchess, Irene’s Ghost and  X+Y.

However, some of the most watched films in the East are not mainstream blockbusters, they don’t feature BAFTA winning actors nor do they feature rousing music. They are a vast range of documentaries, home movies, news footage, forgotten TV programmes and government films from throughout the last century that feature in the National Lottery funded BFI project Britain On Film.

The no1 most watched film is In Old St Albans in 1920, a travelogue that takes in all its glory including the Cathedral, Clock Tower and roman ruins that punctuate the bustling street scenes.

Britain on Film is an ambitious project- one of the largest and most complex archival projects ever undertaken by the BFI and one of the most successful with over 75 million online views to date, 78% of those outside of London and the South East having launched in 2015. It has made over 10,000 titles from 120 years’ worth of films available to the British public for free, drawn from the BFI National Archive and regional and national archive partners from across the UK.

Britain on Film: The Top 10 most watched films in the East

Popular with Romans, monks, and the Hertfordshire Albanians of 1920 and today, the historic city of St Albans was made to be put on film. A fantastic phantom ride into the market place reveals a familiar yet subtly different landscape – even the ubiquitous coffee shops of today have an analogue in the St Albans Workman’s Coffee Tavern.

A crowded market place of bargain hunters in Sudbury Town; with the magnificent St. Peter’s Church prominent in the square. Sudbury’s market is more than 1000 years old, mentioned in a charter dating back to 1009. It is still running today and is one of Suffolk’s biggest and best markets.

Narrated by broadcast Michael Aspel, Beds County Planners look to the future with the solution of a modern pedestrianised shopping precinct for the problem of overbearing town centre traffic on Dunstable shoppers.

On the Essex line from Wivenhoe to Brightingsea, Guard Proctor checks for tickets as passengers share the wonderful view of yacht racing on the River Colne from their carriage.

The Essex villages of Finchingfield and Great Bardfield represent the idyllic English village of popular cliché in this film, aimed chiefly at the overseas tourist market of the 1930s.

In 1978, Prince Charles arrives to open the new YMCA in Charter Place. This film goes back to chart the £12 million development which transformed the heart of Watford.

Time-lapse photography, the view from the passenger seat of a moving car travelling around Stevenage, giving a visual tour and mapping the layout of England’s first New Town.

An insight into Hertfordshire as seen through the eyes of a local cine enthusiast, including views of Hemel Hempstead, Watford, Maidenhead, Whipsnade Zoo, Hastings, Welwyn, Hertford, Hatfield, Harpenden and Stevenage.

A visual tour of East Anglia, captured by an amateur filmmaker, and featuring many of the region’s settlements, from rural hamlet to coastal town and beyond. Beginning in Cambridgeshire, at the county’s capital, then over the border to West Suffolk, next Essex, before returning to Suffolk this time the east of the county, and finally touring Norfolk.

Comedian and amateur film historian, Paul Merton said: “Britain on Film is an ambitious project that has made the rich unseen film history of the UK accessible to the whole nation, with thousands of titles from 120 years’ worth of films drawn from the BFI National Archive and regional and national archive partners from across the UK and Northern Ireland from Victorian times to the 1990s.

“Whilst you or I may never have heard of them before and they will never trouble the weekly box office lists, the films have captured the imagination of the British public and amassed an incredible 75 million online views. They are incredible and are a wonderful way to get lost in our history and heritage for an hour, or even a day. I love it, and all thanks to those pink tickets at newsagents.”

Patrick Russell, Senior Curator of Non-Fiction at the BFI said: “Britain on Film has completely transformed the British public’s access to the archives preserving UK film and TV heritage.  This simply would not have been possible without funding from the National Lottery.

“Over 10,000 films from the archives are now available for everyone in the UK to enjoy – an astonishing range of content, from Edwardian tram rides to wartime public information, from quirky animations to thoughtful documentaries, forgotten feature films to home movies. Britain on Film explores a vast range of themes and maps the whole of the UK. We live in the moving image age and today’s audiences and filmmakers have so much to be inspired by as they explore this rich treasure trove from the past”

The National Lottery has invested over £933 million into almost 23,000 film-related projects over the past 25 years – from iconic films, education and skills programmes, to community film clubs and preserving the UK’s film heritage. National Lottery-supported films have won an incredible 400 awards including 15 Oscars®, 100 BAFTAs and 29 Cannes awards, from more than 1,462 nominations.

BFI has launched the next phase of Britain on Film, with ‘BFI Contribute’, a crowdsourcing platform to harness all the wonderful stories and local expertise that have come out of the public’s desire to share their knowledge. The BFI is calling upon the public to watch and contribute any information they may have about the films on a local level. The BFI Britain on Film Mapping Mission is an online community that everyone can visit, empowering the people of Britain to take an active part in the BFI’s research, sharing local expertise with the rest of the nation to unlock answers and make real discoveries to enrich our understanding about, our shared film history.

Britain on Film is an ambitious project that has made the rich unseen film history of the UK accessible to the whole nation.

Britain on Film has completely transformed the British public’s access to the archives, preserving UK film and TV heritage. This simply would not have been possible without funding from the National Lottery.

Patrick Russell, Senior Curator of Non-Fiction at the BFI

Some of the most watched films in the East are not mainstream blockbusters. They are a vast range of documentaries, home movies, news footage, forgotten TV programmes and government films from throughout the last century.