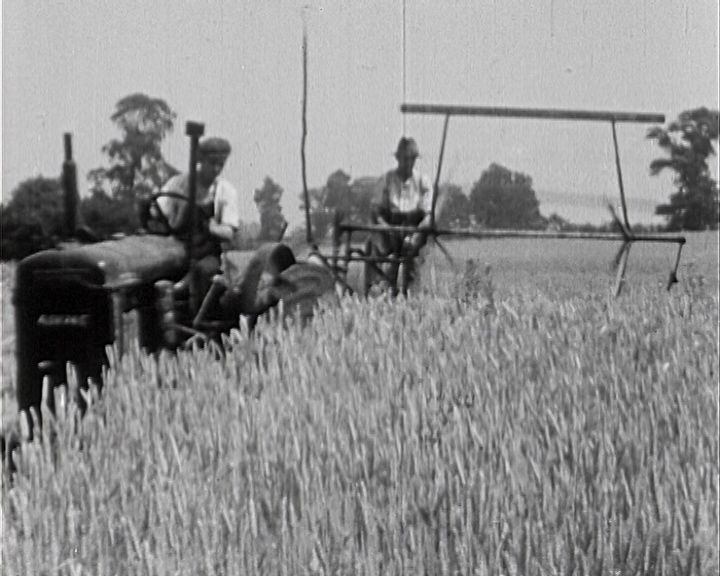 The harvesting of wheat, oats and barley using the binder and combine harvesters.

The harvesting of wheat, oats and barley using the binder and the combine harvester. The binder is cuts oats and binding it into sheaves. The sheaves are collected together into stookes which are loaded onto a trailer and taken away for storage. This will be in a stack or a Dutch barn. Some of the oats are threshed immediately; the threshing machine in operation. The film shows the grain being sacked and weighed and then tied. The chaff is bagged and then the straw stacked. The film cuts away to the combine harvester. This is shown in operation. The grain is transferred to a waiting lorry and then bagged. The pick up baler bales the straw.

There are three main corn crops in Britain ...Wheat ...... oats ......and Barley. Each crop is usually harvested by one of two methods ......the binder ...... The combine harvester. The binder cuts the corn and binds it into sheaves.Stookes are made from the sheaves. The crop is either stored in stacks or Dutch barns for late threshing or threshed immediately.The grain is sacked and weighed. The chaff is bagged...... and the straw is stacked.The combine harvester cuts the corn and separates the grain in one operation.The grain is transferred to the waiting lorry.And the straw is dealt with by the pick up baler.

In 1946 Peter Boulton and Gilbert Hawker set up Boulton Hawker Films. Their main objective was to make educational films. This is one of a series of films on local crafts made between 1946 and 1947. Boulton Hawker also made films on agriculture, market gardening and geography.